Located on the western edge of Lhasa at the bank of River Kyichu and just a kilometer from the famous Potala Palace, Norbulingka Palace (ནོར་བུ་གླིང་ག) offers the best landscapes in the region. Spread over an area of 360,000 square meters, Norbulingka features the summer palaces of the Dalai Lamas with 374 rooms, and the largest, most beautiful, and well-preserved gardens in the Qinghai-Tibet Plateau.

Norbulingka (Luobulinka in Chinese) means Treasure or Jeweled Park in Tibetan. Listed by UNESCO as a World Cultural Heritage Site in 2001, Norbulingka reflects the religious and ethnic aspects of the Tibetan, Han Chinese, and other tribes with its impressive architecture. Norbulingka houses more than 30,000 cultural relics and is a national tourist attraction of the Tibetan region.

An annual Shoton Festival in the first week of July is held at Norbulingka where people enjoy food and drinks, and watch Tibetan operas along with traditional dances.

In the past, the area was prevalent with weeds, scrubs, and wild animals, and was frequently visited by the 7th Dalai Lama in the summer. Some records suggested the Dalai Lama used the hot springs in the area to cure his health problems. The Imperial Minister of the Qing Dynasty ordered for a Pavilion Palace to be built for the Dalai Lama as a summer retreat.

Later in 1751, a three-floor palace named Kelsang Potrang inside Norbulingka itself was added by the 7th Dalai Lama which consisted of the Buddha hall, an assembly hall, a reading room, a god temple, and a bedroom. The 8th Dalai Lama made additions to Norbulingka in the form of palaces such as the Dragon King Temple, the Lake Heart Palace, and Han-style pavilion and gardens. Up until the 14th Dalai Lama, Norbulingka had seen many extensions, and now is a complex with many palaces, flower gardens, and lakes. 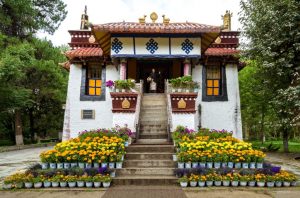 Palaces of Norbulingka
Norbulingka has five distinct sections: Kelsang Palace, Tsokyil Palace, Golden Linka, Takten Migyur Palace, and Lake Heart Palace. Each palace has three main sections: the palace area, the forest area, and the area in front of the palace. (Note: the Tibetan word for “Palace” is “Potrang”.)

Kelsang Palace
This palace was built by the 7th Dalai Lama in typical Tibetan style and consists of worship rooms, reading rooms, and bedrooms. The main hall features the throne of the 7th Dalai Lama amidst statues of Guanyin Bodhisattva and Longevity Buddha.

Tsokyil Palace
It lies to the northwest of Kelsang Palace in the midst of the lake and is the most attractive pavilion built by the 8th Dalai Lama.

Golden Linka and Chensel Palace
To the northwest of Kelsang Phodrong lies also the Chensel Palace and on the west side of Norbulingka is the Golden Phodron. Both these were built in 1922 by a benefactor for the 13th Dalai Lama.

Takten Migyur Palace
Completed by 1956, Takten Migyur Palace was built by the 14th Dalai Lama and is also referred to as the New Summer Palace. More magnificent and larger than the other palaces, the New Palace features exquisite murals of Sakyamuni and his eight contemplative disciples, and also those related to the development of Tibet.