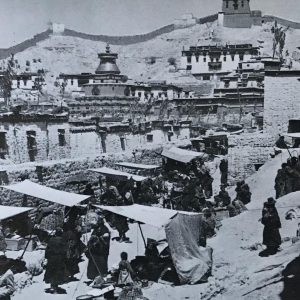 Gyantse market with Gyantse Palkhor Chorten (stupa) in the background. Gyantse was historically considered the third largest and most prominent town in the Tibet. The stupa is considered one of the great achievements of Tibetan architecture. 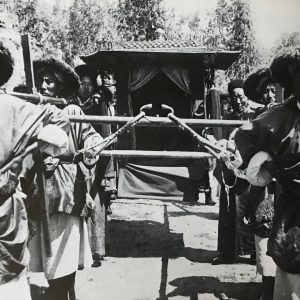 The Thirteenth Dalai Lama’s state palanquin or phep-chang being carried in the annual procession from the Potala to the Norbu-Linka. Bearers and attendants surround the palanquin.
Photographer: Rabten Lepcha,1921. Source: Pitt Rivers Museum. 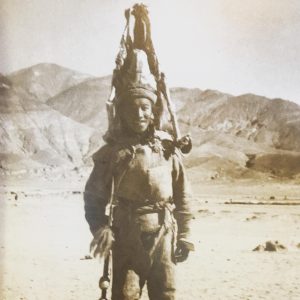 Postal runner carrying the Tibetan government mail between Gyantse and Gobshi. Runners were local people providing the service as part of their tax. Mail was carried in 4-mile relays and a number of postal stations existed on the main routes. Each runner carried letters in a cloth bundle over his shoulders. The spear was a defence against wild animals and robbers while the bells at the top let people know the courier was coming. Sir Charles Alfred Bell. 1920. Source: Tibet: Caught in Time